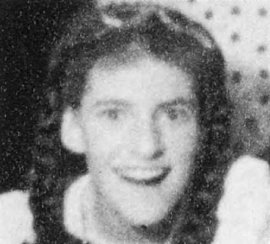 Maria Leipelt attended the Elise Averdieck School but had to leave because her family was persecuted under the Nuremberg “race laws” due to her mother’s Jewish origin. She came into contact with the Hamburg White Rose circle through her brother Hans Leipelt, meeting Karl Ludwig Schneider and other members of the resistance group. Her brother and Heinz Kucharski encouraged her critical stance on National Socialism. In 1942 Maria Leipelt attended a private language school, where she formed a close friendship with her fellow student Ilse Ledien, introducing her to her family and friends. Hans Leipelt brought the last White Rose leaflet to Hamburg at Easter 1943 and Maria Leipelt and Ilse Ledien transcribed and distributed many copies. After her languages course, Maria Leipelt took a job as an office clerk and shorthand typist, continuing her resistance activities. She was arrested on November 9, 1943. After the preliminary investigation was closed, Maria Leipelt and 18 other members of the Hamburg White Rose were transferred to the Hamburg municipal remand prison on Holstenglacis on October 26, 1944. On November 10, 1944, she was transferred via Berlin-Alexanderplatz police prison to Cottbus women’s penal institution. There, Maria Leipelt received her brother Hans’s farewell letter from January 29, 1945, the date of his execution. Maria Leipelt was transferred to Leipzig-Kleinmeusdorf in February 1945 and from there to St. Georgen penal institution in Bayreuth, where the trials were to take place because the “People’s Court” in Berlin had been destroyed by bombs. The joint charge brought against her and other members of the Hamburg White Rose by the senior Reich prosecutor before the “People’s Court” on February 23, 1945, was: “preparation for high treason, aiding the enemy, subverting the war effort, and radio crimes.” Maria Leipelt was liberated in Bayreuth by the U.S. Army on April 14, 1945, while the “People’s Court” in Hamburg was still trying members of the White Rose on April 20.