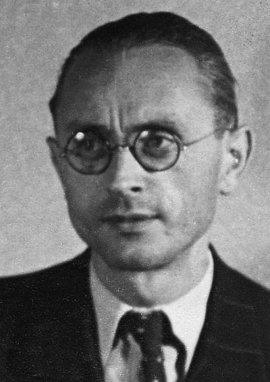 Helmut Kirschey, a Social Democratic construction worker from Wuppertal-Elberfeld, lost his father in World War I. His mother then joined the USPD, serving on the Elberfeld council for the KPD up to her death in 1924. All four of her sons became members of the Communist Youth Federation. In 1931, Kirschey joined the anarcho-syndicalist Freie Arbeiter-Union Deutschlands (Free Workers’ Union of Germany – FAUD). He was arrested in March 1933 and imprisoned for several months, emigrating to Holland in November 1933. He went to Spain in August 1936, initially working in the German anarcho-syndicalists’ police service in Barcelona, which was put in charge of all German-speaking foreigners. Kirschey joined the International Company of the Durruti Column in February 1937. He took part in the May battles in Barcelona on the anarchist side. Kirschey was arrested along with other German anarcho-syndicalists in June 1937, and put into communist secret prisons in Barcelona and Valencia, and imprisoned in Segorbe from April 1938. After that he spent some time in France and Holland. In early 1939, Kirschey managed to enter Sweden, where he was not granted a residency permit and did not receive permission to work during the first years of his stay. Nevertheless, he continued to fight National Socialism in conjunction with the International Transport Workers’ Federation (ITF), and survived the war.