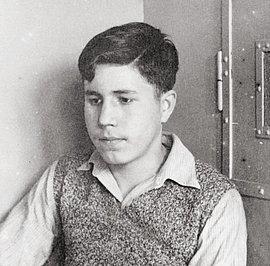 Hans Gasparitsch grew up in Stuttgart, the only child of Johannes and Elisabeth Gasparitsch. In 1931, he took part in international summer camps run by the socialist Kinderfreunde children’s movement. He had to leave senior school because his father could not afford the fees. Hans Gasparitsch began training as a typesetter in 1932. After the National Socialists took power, a resistance group formed among Gasparitsch’s friends, initially posing as a hiking group. They called themselves “G” for “Gemeinschaft” (community). The members distributed flyers, held educational sessions, and made contact to other opponents to National Socialism. On March 14, 1935, Hans Gasparitsch write the slogans “Hitler = War” and “Red Front” on the base of two statues in Stuttgart’s Schlossgarten park, not noticing that he got paint on his clothing. This enabled the Gestapo to apprehend him when he returned to the park an hour later to look at his work. Gasparitsch was initially sentenced to two and a half years’ imprisonment. After serving his sentence, Hans Gasparitsch was transferred to various concentration camps. He was held in camps for a total of ten years. His last station was Buchenwald, where he was involved in the prisoners’ self-liberation on April 11, 1945. He returned to Stuttgart in May 1945. Hans Gasparitsch was one of the founders of the Association of Victims of the Nazi Regime in southwest Germany.