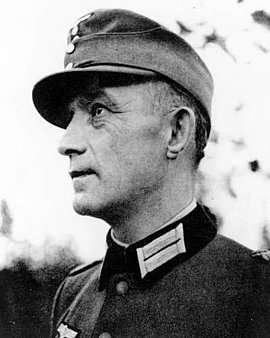 Wessel Freiherr Freytag von Loringhoven, whose family originated from Livonia, left the newly-founded republic of Latvia in January 1922 and obtained German citizenship in order to become a Reich Army officer. He was married to Elisabeth von Rauch, with whom he had four sons. After the German invasion of Poland in September 1939 and the occupation of Norway the following year he became increasingly critical of Hitler’s conduct of the war, particularly because of the German occupation policy in the east. In June 1941 Wessel Freiherr Freytag von Loringhoven was transferred as first officer to the staff of Heinrich Graf zu Dohna, and in 1943 at the instigation of Admiral Wilhelm Canaris he was detached as colonel (G.S.) to the Office for Foreign Affairs/Counterintelligence in the Armed Forces High Command in Berlin. Freytag von Loringhoven came into contact here with the resistance circle around Claus Schenk Graf von Stauffenberg, and eventually obtained the powerful explosives which Stauffenberg smuggled on July 20, 1944 into the hut where briefings were held in the “Führer’s” headquarters, the “Wolf’s Lair”, near Rastenburg in East Prussia. Fearing arrest by the Gestapo, on July 26, 1944 Wessel Freiherr Freytag von Loringhoven committed suicide in the woods near his operational base in East Prussia.