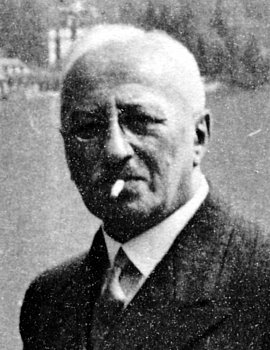 Having trained for the publishing industry, Theodor Wolff joined the staff of the Berliner Tageblatt at the age of nineteen, and was the newspaper’s editor-in-chief from 1906 to 1933. In 1918 he was among the founders of the German Democratic Party, leaving in 1926 in protest against liberalism’s lack of distance to the political right. German nationalists became increasingly hostile to him because he had campaigned against German annexations during World War I. Wolff was in favor of reconciliation with France and was a foreign policy advisor to Gustav Stresemann and Heinrich Brüning. In March 1933 he emigrated to Switzerland via Austria, moving on to the south of France a year later. He worked regularly for important exile journals. In the fall of 1941, he obtained an entry visa for the United States, but the visa expired. In May 1943 the Italian occupying authorities handed Theodor Wolff over to the National Socialists. He was put into Sachsenhausen concentration camp and later the Berlin police prison. Theodor Wolff died after an operation in the Berlin Jewish Hospital on September 23, 1943.