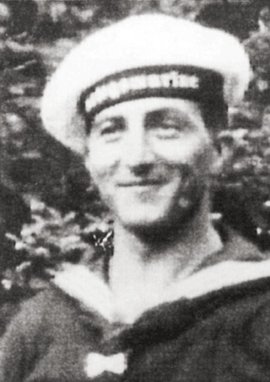 Walter Stanoski Winter grew up with eight brothers and sisters in a traveling family. He attended elementary school in Oldenburg. At the age of eleven, he joined his parents traveling all year round, and attended school wherever the family was staying. He had to perform labor service from 1938 until he and his brother Erich were called up to the Wehrmacht in January 1940. Walter Winter held the rank of petty officer in the navy in Wilhelmshaven. Being Sinto, he was not promoted for "racial reasons," and was dismissed from the Wehrmacht in 1942, returning to Oldenburg. In March 1943, Walter Winter, his brother Erich, and his sister Maria were deported to Auschwitz-Birkenau extermination camp. It was there that he met his first wife, Bluma Schubert. Walter Winter took part in the uprising of May 16, 1944, in the "gypsy camp" at Auschwitz-Birkenau. Winter, his brother and sister, and his wife were taken to Ravensbrück concentration camp on July 31, 1944. Shortly before the end of the war, he and his brother were moved to Sachsenhausen concentration camp, and transferred from there back to the front, due to their military experience. Walter Winter was wounded, but he and his brother survived the war. His wife Bluma perished in Ravensbrück concentration camp shortly before the end of the war.