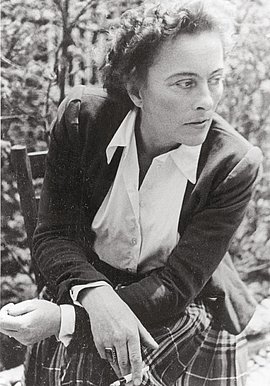 The Berlin journalist Ruth Andreas-Friedrich and her partner, the conductor Leo Borchard, grew
more and more concerned by the Nazi regime’s increasingly harsh measures against Jews. They
helped Jewish acquaintances escape from Germany and took friends into their home in Berlin
during the anti-Jewish pogrom of November 1938.
Soon after that, they began regularly meeting
with like-minded friends to discuss help for victims
of persecution. This group was later known as
“Uncle Emil.”
As more and more of Berlin’s Jews went
underground to escape deportation during 1942,
Andreas-Friedrich and her friends supported a
number of them. They obtained food ration
stamps, food, and false papers, and organized
accommodation. In 1943 the network of
helpers distributed copies of the last leaflet by
the Munich White Rose resistance group in
Berlin. During the night of April 18, 1945, they
painted a very visible “NO” on walls in the
south of the city, and two nights later distributed
numerous flyers calling for resistance against
Hitler’s commands to keep fighting.