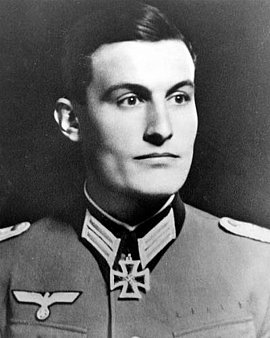 Roland von Hößlin came from an Augsburg family. As a young officer he saw how the National Socialists conducted the war, and this caused him to change from being a faithful supporter to a firm opponent of Hitler. As commander of a tank reconnaissance detachment in the Africa Corps he was wounded in July 1942 and awarded the Knight’s Cross. Hößlin was a major in the Bamberg 17th Cavalry Regiment, Stauffenberg’s old regiment. In April 1944 Stauffenberg told him about the conspirators’ plans to overthrow Hitler. In the event of a successful coup, as commander of tank reconnaissance reserve detachment 24 in Insterburg/East Prussia (military district I), Hößlin was to occupy key buildings and organize measures against the NSDAP. Hößlin was arrested on August 23, 1944 in Meiningen/Thuringia, discharged from the Army and sentenced to death by the People’s Court on October 13, 1944. He was murdered the same day in Berlin-Plötzensee.