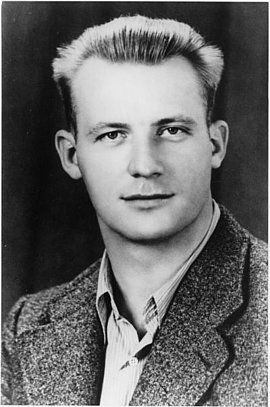 Magnus Poser, born in Jena in 1907, grew up in a working-class family and became a carpenter. He joined the Communist Youth Federation in 1919 and the KPD in 1928. He was sentenced to several years’ imprisonment in a penitentiary for political activities in April 1934, working as a carpenter in Jena after his release. From 1938 to 1941, he organized a communist resistance circle in the city. The group’s activities only intensified after the Wehrmacht’s attack on the Soviet Union. Magnus Poser met Theodor Neubauer in early 1942, and the two men brought various communist resistance groups in Thuringia together. From the fall of 1943, the resistance organization around Theodor Neubauer and Magnus Poser produced up to 1500 copies each of at least five different leaflets. In them, Neubauer and his friends reminded readers of the Nazis crimes of violence in occupied Europe and the German genocide of European Jews. They encouraged the Germans to distance themselves from the Nazi government responsible for these crimes and work with all their might towards a fast end to the war. Magnus Poser was arrested on July 14, 1944 and severely injured during an escape attempt from Weimar prison. He died in Buchenwald concentration camp on July 21, 1944.