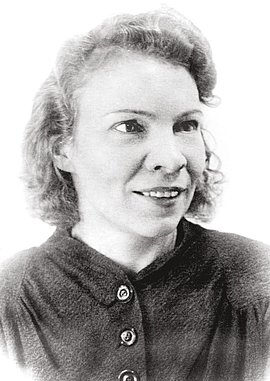 Born in Berlin, Käthe Niederkirchner was the daughter of a pipe fitter and communist labor union official, Michael Niederkirchner. She learned the trade of tailoring. In 1925 she joined the Young Communist Federation and in 1929 the German Communist Party (KPD). In 1933 she emigrated to the Soviet Union with her family and continued working as a tailor while attending several study courses. Her elder brother Paul was arrested by the Soviet secret service in 1939 and perished in Butyrka Prison in Moscow. After the German invasion of the Soviet Union, Käthe Niederkirchner volunteered for action in Germany. On October 7, 1943 she and Wilhelm Pieck’s son-in-law, Theodor Winter, parachuted down from a Soviet airplane, landing in Poland. They were supposed to make contact with communists in Berlin, but were discovered on the way to the city. Theodor Winter was executed by firing squad in Sachsenhausen concentration camp. Käthe Niederkirchner was executed by firing squad in Ravensbrück concentration camp on the night of September 27-28, 1944.