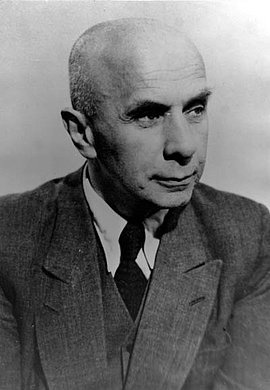 Jakob Kaiser initially learned the bookbinder's trade and was active in the Kolping-Verein in Nürnberg even before the First World War. In the Weimar Republic, he was regarded as a leading proponent of the Christian labor union movement. He soon became a resolute opponent of the National Socialists, who in 1933 forced all the individual unions to conform to the party line and form the "German Labor Front." From the beginning of the National Socialist regime, Kaiser remained in close contact with Wilhelm Leuschner and Max Habermann. With them, Kaiser spoke out in support of a single amalgamated labor union. A circle of opponents of the regime in close contact with Carl Goerdeler formed around Kaiser in the years that follow. After the unsuccessful assassination attempt of July 20, 1944, Kaiser was wanted by the Gestapo. However, with the aid of his later wife and long-time political associate Elfriede Nebgen, he was able to go underground. Kaiser survived the end of the war and went on to become one of the founding members of the Christian Democratic Party in Berlin.