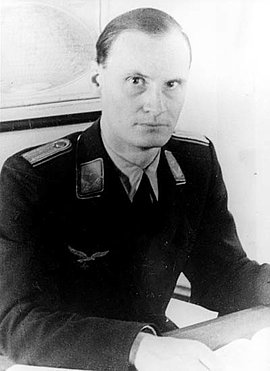 Harro Schulze-Boysen, a great-nephew of Admiral Alfred von Tirpitz, was active in the Jungdeutscher Orden (a nationalist youth organization) at the end of the 1920s. As publisher of the journal “gegner” (“opponent”), he had a wide variety of contacts in different political camps in 1932-33. After “gegner” was banned he was briefly imprisoned in an SA torture cellar in Berlin. In May 1933 Schulze-Boysen began a training course at the commercial aviation school in Warnemünde. From April 1934 on he worked in the Reich Aviation Ministry. In the mid-1930s he gathered a circle of close friends around himself which developed into a resistance group. Its members included his wife Libertas, Elfriede Paul, Walter Küchenmeister, Elisabeth and Kurt Schumacher, and others. Together with Arvid Harnack, First Lieutenant Schulze-Boysen in the Attaché Group of the Reich Aviation Ministry was the leading figure in the Red Orchestra resistance organization. In the first six months of 1941, Harnack and Schulze-Boysen informed a Soviet embassy representative about the National Socialists’ plans for an attack on the Soviet Union. Schulze-Boysen was willing to maintain contact with Moscow during the war via a radio transmitter, but technical problems prevented the establishment of transmissions. After June 22, 1941 Schulze-Boysen recruited new members to the resistance, and was involved in writing leaflets and in a flyposting action. He had contacts to opponents of Hitler with various political and ideological viewpoints. At the end of October 1941, a courier from the Soviet military intelligence service arrived in Berlin from Brussels and visited Schulze-Boysen for a discussion. The Gestapo discovered Schulze-Boysen’s name and address from a decoded telegram from Moscow to Brussels, and arrested him on August 31, 1942. He was sentenced to death by the Reich Court Martial on December 19, 1942. On Hitler’s orders he was murdered by hanging in Berlin-Plötzensee.