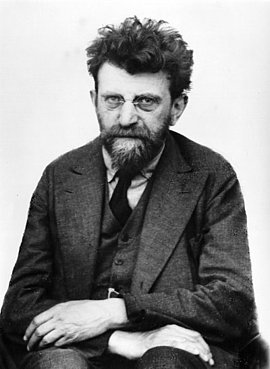 A radical critic of bourgeois society, Erich Mühsam rejected all forms of state control and advocated political anarchism from an early point. He fought for a radical form of soviet democracy in the 1918 November revolution, was sentenced to fifteen years’ imprisonment in a fortress in 1919 for “literary high treason,” and not pardoned until 1924. He published the anarchist monthly magazine Fanal from the fall of 1926, calling for “social revolution.” Mühsam was arrested immediately after the Reichstag fire, and severely maltreated. He was regarded as a “November criminal” – a particularly loathed Marxist. Erich Mühsam was taken from the prison in Berlin’s Lehrter Strasse to Sonnenburg concentration camp, from there to Berlin-Plötzensee prison, and finally to Brandenburg concentration camp. At the beginning of October 1933, he was put into Oranienburg concentration camp, where he was also subjected to violence. Erich Mühsam was murdered by an SS commando in the night of July 9-10, 1934.