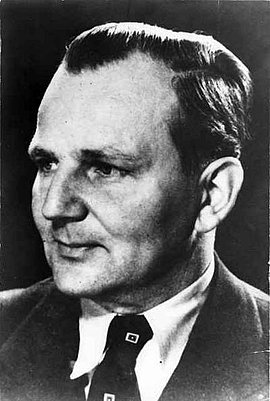 After fighting as a volunteer in the First World War, Carlo Mierendorff studied philosophy and political economy from 1918 to 1922. In 1923 he gained his doctorate in Heidelberg on the subject of the economic policy of the German Communist Party (KPD). He had been a member of the Social Democratic Party (SPD) since 1920 and was acknowledged as an active and dependable Social Democrat. In 1929 he was appointed press office chief on the staff of Wilhelm Leuschner, the interior minister of Hesse, and became one of Leuschner’s closest colleagues. Carlo Mierendorff was elected to the Reichstag in 1930. Even before 1933 he was seen as one of the bitterest opponents of the National Socialist Party (NSDAP) and its propaganda chief, Joseph Goebbels. As early as 1931, Mierendorff succeeded in drawing public attention to the “Boxheim Documents”, which contained detailed plans for a National Socialist coup. In 1933, despite numerous warnings from friends, Mierendorff returned to Germany from a trip to Switzerland. He was arrested, maltreated and tortured in concentration camps until 1938. After his release he renewed contact with his former political comrades and – like his friend Theodor Haubach – became involved in the Kreisau Circle. Mierendorff had a decisive influence on the Circle’s discussions on social policy. He succeeded in smoothing over the contradictions between socialist and Catholic viewpoints. In June 1943 he drew up the appeal to create a broad-based resistance movement under the name “Socialist Action”. These plans were abruptly halted when Carlo Mierendorff perished in an Allied bombing raid on Leipzig on December 4, 1943.