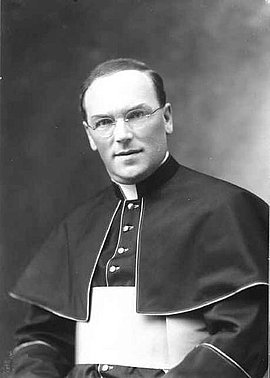 Born in Vorarlberg in Austria, Carl Lampert was ordained as a priest in Brixen in 1918. After studying canonical law in Rome, in 1935 he was appointed director of the ecclesiastical court in the Apostolic Administration of Feldkirch. In 1939 he became provicar of Innsbruck. Carl Lampert was arrested several times for his protests against National Socialist church policy and finally imprisoned in Dachau and Sachsenhausen concentration camps. After his release in August 1941, the Gestapo compelled Lampert to take up residence in Mecklenburg-Pomerania. He found accommodation in Stettin and assisted in the ministry in the vicinity of the city. Even in exile, Lampert retained his critical attitude to the regime, unaware that he was under Gestapo observation. His discussions, telephone calls and correspondence were under surveillance. In February 1943 Carl Lampert was arrested again and severely maltreated during interrogation. The Gestapo accused him not only of expressing his opinions on the deportation of Jews and the murder of patients from psychiatric clinics but also of listening to foreign radio stations and “giving aid and comfort” to forced laborers. Carl Lampert was sentenced to death by the Reich Court Martial on September 8, 1944 and murdered with Friedrich Lorenz and Herbert Simoleit on November 13, 1944 in Halle/Saale.