"Traitors" or "Heroes?" Fritz Bauer and the "Trial of the July 20 Coup"

An exhibition of the German Resistance Memorial Center

Otto Ernst Remer, the commander of the “Großdeutschland” guard battalion, was involved in the counteraction in the Bendler Block on the evening of July 20, 1944. In 1949, he was one of the co-founders of the extreme-right Socialist Reich Party. In the spring of 1951 Remer also slandered the resistance fighters as “traitors to their country.” The Braunschweig district attorney Fritz Bauer brought charges against him for slander and defaming the memory of the dead. Bauer initiated a “trial of July 20 coup.” He hoped to rid the resistance fighters of the stigma of treason and finally establish the right to resistance against the unjust Nazi regime.

The Braunschweig district court heard the case for four days in March 1952. Relatives and survivors testified about the resistance fighters’ motives. Expert witnesses spoke about the oath and refuted the “stab in the back” theory put forward by Remer. One of the trial’s highlights was Fritz Bauer’s closing summation. The trial was reported on across the country. The Braunschweig district court issued a three-month sentence for Otto Ernst Remer and regarded the attempted coup of July 20, 1944 as legitimate. The case against Remer was thus a key step towards recognition of the resistance of July 20, 1944.

The exhibition is on display at the German Resistance Memorial Center in the special exhibition area on the first floor from March 14, 2022, to July 5, 2022. 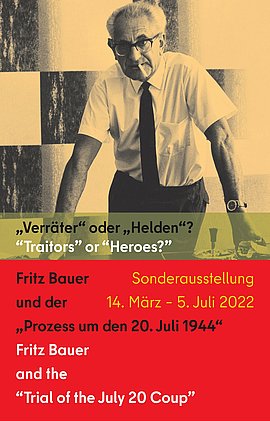