“A great many memoires and literary texts about the Holocaust have been published over the past decades. But hardly anyone noticed that the voice of an important group was all too often Missing: that of the women. Nobody seemed to be particularly interested in their specific experience. It is almost as if the chorus of male voices drowned those of the women. Yet, in contrast to the men, the women – as young girls, wives, mothers – clearly experienced things differently and suffered differently.

The memories of the women also address topics that so far have been all too often neglected by historical or literary publications: in addition to the feelings of being physically and spiritually at the mercy of their tormentors, and in addition to the horrifying experiences of fear and violence, there are stories of survival and bravery, of solidarity and friendship.

We have crystallised of this in the title of the exhibition, just as Ágnes Bartha formulated in her memoires:

'The possibility of sticking together with my friend was very important. Alone, neither of us would have survived'.” 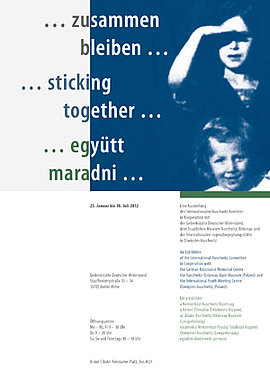 The opening of the exhibition takes place in the German Resistance Memorial Center, second floor, Room A on January 25, 2012 at 6 p.m.:

Dietmar Nietan
Member of the Bundestag

Dr. Katalin Pécsi-Pollner, Budapest, in conversation
with the Hungarian-origin Auschwitz survivors
Irma Biedermann and Nomi Gur   The exhibition will be on display on the first floor in the special exhibitions area until July 10, 2012.
Opening hours