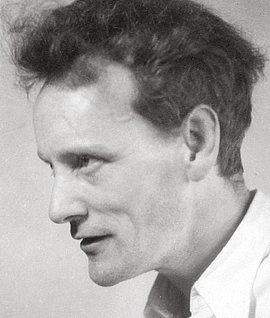 Born in Cologne, Wilhelm Schürmann-Horster returned from World War I as a pacifist and joined the KPD in 1923. Up to 1933, he worked as an actor at theaters in Hagen, Mülheim/Ruhr, Godesberg, and Düsseldorf. Arrested in 1934 for illegal activities for the KPD, Schürmann-Horster was acquitted by the Hamm higher regional court due to lack of evidence. From 1937 on, he worked freelance for film companies, and from November 1941 as a director and dramaturge at the Grenzlandtheater in Konstanz. He met the sculptor Cay von Brockdorff and his wife Erika at a costume party at the Academy of the Arts in Berlin in 1938. The result was a discussion circle attended by Jutta and Viktor Dubinsky, the sculptress Ruthild Hahne, the dancer Hanna Berger, the architect Friedrich Schauer, from 1939 the workers Karl Böhme, Hans Coppi, and Wolfgang Thiess, and from mid-1941 also Herbert Grasse and Eugen Neutert. A group structure was created in 1940, to enable training sessions, a regular exchange of information, and links to resistance cells in workplaces. The group produced and passed on illegal texts. Wilhelm Schürmann-Horster was arrested in Konstanz on October 29, 1942, sentenced to death by the “People’s Court” on August 21, 1943, and murdered in Berlin-Plötzensee.