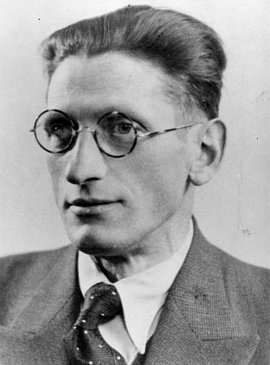 Born in Offenbach in 1899, Wilhelm Knöchel grew up in a working-class social democratic family and learned the trade of turner. He joined the army in 1917 and was severely wounded. Knöchel joined the SPD in 1919, switching to the KPD in the Ruhr region in 1920. He married in 1922. His wife, with whom he had one daughter, died in 1930. In 1932, Knöchel took part in a training course at the Lenin School in Moscow, initially working illegally in Germany after his return in 1934/35. Elected onto the central committee of the KPD in 1935, Wilhelm Knöchel was supposed to set up a resistance organization from a base in Amsterdam after 1939. The outbreak of World War II, however, interrupted communications between the KPD’s West German regional leadership in Amsterdam and the illegal communist groups in the Ruhr region. In January 1942, Wilhelm Knöchel entered Germany illegally from Amsterdam to renew the communist resistance in the west of the Reich. As no safe accommodation could be found for him in the Ruhr region, Knöchel lived in Berlin, where he was supported by Alfred Kowalke. Knöchel made several journeys to Düsseldorf, Essen, and Wuppertal in 1942, to talk to workers from certain factories. Three of his comrades from Amsterdam were also active in the Ruhr region, and a new resistance organization was formed. Wilhelm Knöchel kept in contact with his common-law wife Cilly Hansmann in Amsterdam via courier. She was working with Dutch resistance fighters, who maintained radio contact with Moscow. Thus, Knöchel was also in touch with the KPD leadership in exile in Moscow, but took a critical approach to their instructions, like many other communist resistance fighters at the time. Wilhelm Knöchel was arrested on January 30, 1943, sentenced to death by the People’s Court on June 12, 1944, and murdered in Brandenburg-Görden penitentiary on July 24, 1944.