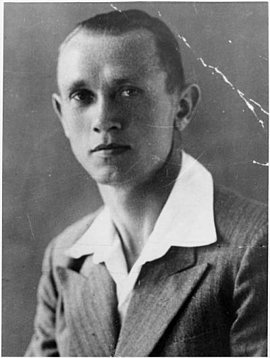 Walter Bohne, born in Burg near Magdeburg in 1903, was the son of a master tailor and became a ship-builder. He joined the Communist Youth Federation (KJVD) in 1921 and shortly later the KPD. He was arrested in 1934 and sentenced to two years’ imprisonment. After his release, he sought out his former political friends and succeeded in gathering a circle of communist workers’ sport activists around him up to 1939. In 1941 Bohne joined the group around Bernhard Bästlein, heading workplace cells at the shipyards. Bohne resisted his arrest in October 1942 and was injured. He managed to go underground after the air raid on Hamburg at the end of July 1943. On January 5, 1944, three Gestapo officers tried to arrest Walter Bohne on the street. He put up resistance and was shot dead.