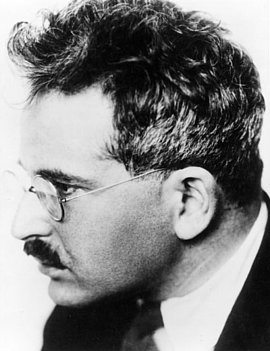 The philosopher and literary scholar Walter Benjamin was a respected literary and cultural critic in the Weimar Republic. When the National Socialists took power, his life was at threat as he was classified a “Jewish intellectual.” Following vain attempts to continue writing and publishing in Germany, he emigrated to France via Spain. In 1934 he took over the Paris bureau of the Institute of Social Research, which had relocated from Frankfurt/Main to New York under Theodor W. Adorno and Max Horkheimer. Despite several invitations, Benjamin refused to follow his colleagues into exile in the United States, staying in Paris and San Remo and working as a writer. His writing on cultural theory and his incisive analyses of modern society and fascism were published to great acclaim in numerous exile journals, particularly the Zeitschrift für Sozialforschung. After war broke out, Benjamin was interned and later taken to the Camp des travailleurs volontaires in Nièvre. Although he received a visa for urgent entry to the USA in the fall of 1940, the French authorities refused to let him leave the country. Having failed to enter Spain illegally in the border town of Port Bou and threatened with handover to the Gestapo, Walter Benjamin committed suicide on the night of September 26/27, 1940.