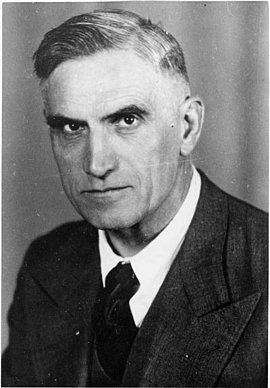 Theodor Neubauer, born in Ermschwerdt in 1890, was the son of a conservative estate manager. He studied history and modern languages in Brussels, Jena, and Berlin. After gaining his PhD in Jena in 1913, he became a teacher, signed up as a soldier at the beginning of World War I, and returned home disillusioned in 1917. Following the November Revolution, he initially joined the German Democratic Party, then left for the USPD, switching to the KPD along with the party’s left wing in 1920. He represented the party in the Thuringia state parliament from 1921 to 1924, serving as an undersecretary on the state workers’ government in 1923. He was a member of the Reichstag for the KPD from 1924 to 1933, living in Berlin from 1930 on. Neubauer was first arrested in August 1933 and sentenced to imprisonment in the fall of 1934. The National Socialists then interned him in various concentration camps. He was not released until the summer of 1939, and then lived with his family in Tabarz (Thuringia). Along with Magnus Poser, Neubauer set up a resistance group in early 1942. From the fall of 1943, the resistance organization around Theodor Neubauer produced up to 1500 copies each of at least five different leaflets. In them, Neubauer and his friends reminded readers of the Nazis crimes of violence in occupied Europe and the German genocide of European Jews. They encouraged the Germans to distance themselves from the Nazi government responsible for these crimes and work with all their might towards a fast end to the war. Theodor Neubauer was arrested in July 1943, sentenced to death in January 1945, and murdered in Brandenburg-Görden on February 5, 1945