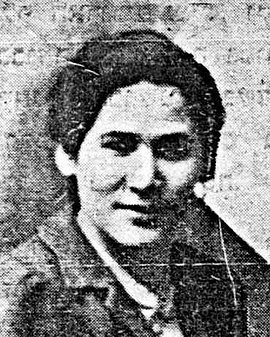 On the outbreak of war, 18-year-old Rosa Robota lived in the small Polish town of Ciechanów. She grew up in a Jewish family and joined the group Ha-Shomer ha-Tsa'ir. The Germans cleared the Ciechanów ghetto in late fall of 1942, murdering some of the inhabitants in Treblinka and taking others to the Auschwitz extermination camp. Rosa Robota survived the initial selection and was sent to work in the clothing section. She soon came into contact with the Jewish underground movement that had formed in the camp. She became the driving force behind an attempt to obtain explosives for an attack on the Auschwitz crematoria, and came into direct contact with the special detachment of prisoners who had to work in one of them. A member of the Jewish underground group, Israel Gutman, reported after the war: "After the end of ‘Operation Höß' – the code-name for the mass extermination of the Hungarian Jews – we heard that 160 men from the special detachment were going to be sent on a transport... But it soon turned out that this transport was just another SS diversion... That only made people all the more determined not to wait but to revolt immediately." On October 7, 1944, prisoners from the special detachment blew up Crematorium III of the Auschwitz extermination camp, killing four SS men and injuring others. The SS discovered that Rosa Robota had played a key role in preparing the attack. She was interrogated and beaten but did not give away her fellow conspirators. She was publicly hanged along with other women on January 5, 1945.