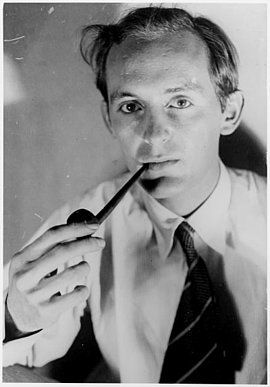 Born in Munich in 1910, Robert Havemann grew up in a family of intellectuals. He studied chemistry, and as a doctoral student experienced the expulsion of his first mentor, Herbert Freundlich, from the Kaiser Wilhelm Institute for Physical Chemistry in 1933. He had contacts to the Comintern from 1932, and joined the socialist resistance group Neu Beginnen (New Beginning) in 1933. Due to their privileged position in society, Georg Groscurth, Robert Havemann, Paul Rentsch, and Herbert Richter had particular opportunities to work against the Nazi regime. They were not only able to help people survive in the illegal underground, but also used the information and connections at their disposal to support, coordinate, and network other people’s resistance activities. They thus became a central point for various groups that had come about independently. They also tried to make contact with the Allies, but this attempt failed. In the summer of 1943, Havemann, Groscurth, Richter, and Rentsch wrote a number of programmatic texts, naming their group Europäische Union (European Union). Havemann was arrested on September 5, 1943 for his involvement in aiding victims of persecution and as the leading mind of the Europäische Union. He was sentenced to death on December 16, 1943. As his research work appeared indispensable for the Nazi arms industry, he received a stay of execution. Havemann was liberated from Brandenburg-Görden penitentiary by the Red Army in 1945. After the war, he joined the East German Socialist Unity Party (SED), but became critical of the regime in the wake of the 20th Congress of the Communist Party of the Soviet Union in 1956. Expelled from the SED in 1964, Havemann lost his post in 1965. He was placed under house arrest from 1976 to 1978. Havemann was one of the most vocal critics of the German Democratic Republic up to his death in 1982.