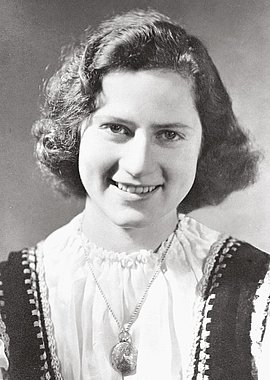 Rita Neumann attended elementary school in Berlin. Hoping to emigrate to Palestine, she went to a hakhshara camp in Hindenburg, Upper Silesia, in 1935/1936. However, she remained in Germany so as not to leave her sick mother and younger brother alone in the country. Drafted into forced labor in 1939, she had to work in the C.J. Vogel wire and cable factory in Köpenick. When her mother, her brother Ralph, and she herself received their deportation order for February 17, 1943, they went into hiding. To begin with, Rita Neumann stayed with families in “mixed marriages,” who were therefore at risk themselves. In March 1943, she went to stay in Salzwedel but was arrested there. She was put into prisons in Hannover, Uelzen and Magdeburg, then managed to escape. She returned to Berlin and received help from the Catholic chaplain Wiesinger and from Gertrud Wendland in Lichterfelde-Süd. She came into contact with Agnes Wendland and her daughter Ruth, and was able to hide in the rectory of the Gethsemane parish in Berlin-Prenzlauer Berg from the summer of 1943. During the day, she was taken in by Elisabeth Abegg and her sister in Berlin-Tempelhof. Ruth Wendland also took care of her. With Elisabeth Abegg’s help, she obtained an “Aryan” identity that summer as Abegg’s alleged niece and was even able to find “legal” work under her false name. In the wake of her brother Ralph’s discovery in mid-February 1945 she was also arrested. Initially held on Oranienburger Straße, she was transferred to Schulstraße, where she was reunited with her brother. The two of them escaped in March 1945, by climbing out of a third-floor window with the aid of a washing line. They sought refuge with Harald Poelchau, who took them in for two weeks. From there, they went to the journalist Ruth Andreas-Friedrich. Separated from her brother Ralph, Rita Neumann experienced the end of the war in Berlin.