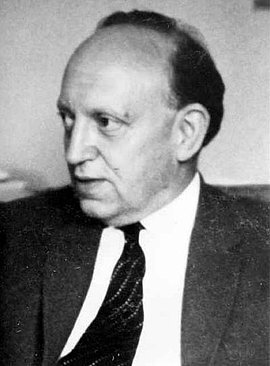 Richard Löwenthal, the son of a commercial salesman, studied economics and sociology in Berlin and Heidelberg from 1926 to 1931. He joined the German Communist Party (KPD) in 1926 and became Reich leader of the KPD student federation “Kostrufa” in 1927-28. As a student he demanded rapprochement between communists and social democrats to enable them to fight the National Socialists more effectively. Löwenthal was expelled from the KPD in 1928 after criticizing the communists’ theory of social fascism. From 1929 to 1931 he was a member of the German Communist Party/Opposition (KPDO). After gaining his doctorate in Heidelberg he joined a circle around Walter Loewenheim which developed into the group “Neu Beginnen” (New Beginning) after 1933. Löwenthal was among the group members who advocated open resistance against Hitler. He contributed to the group’s educational activities with analyses of the economic and political background of German fascism and its mechanisms of domination. To escape a wave of arrests of members of “Neu Beginnen”, in August 1935 Löwenthal emigrated to Prague, where he ran the foreign bureau of “Neu Beginnen” with Karl Frank. During a study trip in 1936-37 Löwenthal was able to establish important links with German exiles in London. His scholarly analysis of National Socialism earned him recognition as a leading theoretician of social democracy. In 1939 Löwenthal fled Prague and went via Paris to London, where he worked as a journalist. Before long he was deeply involved in the debates on the basic principles of the reorganization of Germany. In 1948 he returned to Germany as German correspondent for Reuters News Agency. In 1960 he became a professor at the Free University of Berlin. Richard Löwenthal died in 1991 in Berlin.