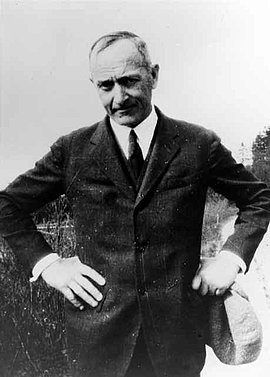 The lawyer Richard Kuenzer entered the Foreign Ministry in 1904, taking on various posts abroad. In 1919 he returned to Germany from a prisoner of war camp, re-entered the diplomatic corps, and was given temporary retirement in 1923. Kuenzer, who was a member of the left wing of the Zentrum Party, co-edited the Zentrum newspaper Germania up to 1927. He spoke out in favor of conciliation with Poland and France, and was an active member of the Friedensbund Deutscher Katholiken (Peace Association of German Catholics). As a confessed Catholic, he was critical of the Nazi regime from the outset. He had contacts with various resistance circles and took part in meetings at the home of Johanna Solf. In 1940/41, he was temporarily entrusted with various courier activities on behalf of the Foreign Ministry, which he used to maintain contact with Joseph Wirth, in exile in Switzerland. Kuenzer also looked into escape opportunities for persecuted Jews. He was arrested on July 5, 1943, and shot dead by a special detachment from the Reich Security Main Office close to Lehrter Strasse prison in Berlin on April 23, 1945.