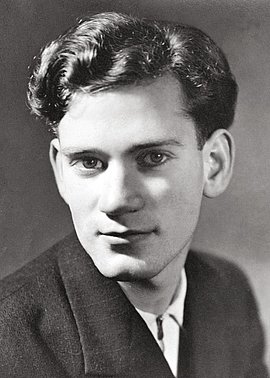 The youngest child of the Neumann family, Ralph grew up in Berlin. He attended Joseph Lehmann School and went on to train as a gardener in Ahlem near Hannover. Returned to Berlin in 1942, he worked at the Jewish Cemetery in Weißensee. From the fall of 1942, he had to perform forced labor for Osram. His sister Rita, his mother, and he himself went into hiding in mid-February 1943 to evade deportation. They could not stay for long in their first hiding places and occasionally returned to their old apartment on Levetzowstraße. His mother Gertrud Neumann was discovered there by the Gestapo in the spring of 1943 and arrested. She died in prison in June 1943. Ralph Neumann stayed on the Fleischer farm in Melchow near Eberswalde, Brandenburg, from June to August 1943. Although he was happy there, he had to leave in August because it was feared he would be discovered. He was once again homeless. His sister Rita had managed to find a hiding place with the pastor’s wife Agnes Wendland in Berlin-Prenzlauer Berg from the summer of 1943. Ralph was also taken in there in the fall. Everything went well until February 1945. He spent the days working for friends of the pastor’s family such as the doctor Fritz Aub, the teacher Elisabeth Abegg, and the prison chaplain Harald Poelchau. In mid-February 1945, Ralph Neumann accompanied a guest of the parish to Lehrter Bahnhof station, where his ID was checked and he was identified as a Jew. Agnes Wendland, who accompanied Rita to the Gestapo, was also arrested. Ralph Neumann was admitted to the Jewish Hospital with blood poisoning, and saw his sister again as a prisoner. When their deportation approached they managed to escape from a third-floor window on Iranische Straße during an air raid. They sought refuge with Harald Poelchau, who took them in for two weeks. Then they went to the journalist Ruth Andreas-Friedrich in Berlin-Steglitz, a core member of the “Uncle Emil” resistance group. Ralph Neumann took part in the group’s “No” resistance action on April 18, 1945. He survived the war and emigrated to the United States in 1946.