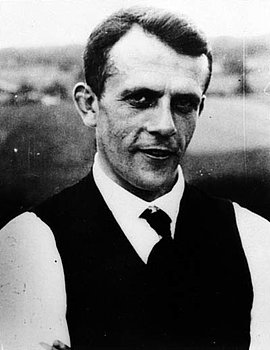 Having grown up in a pastor's household in the Rhineland, Paul Schneider served as a lieutenant in the First World War and studied theology in Giessen and Marburg. After completing his studies, he worked in a steel mill in Hörde, as a minister in Berlin and Essen, and later in a parish in Wetzlar. He joined the Confessional Church and turned against the "German Christians" in 1934 while a minister in Essen. In doing so, he openly came in conflict with the local NSDAP. The Gestapo repeatedly interrogated Schneider through 1936, and temporarily took him into custody a number of times. Because he persisted in his loyalty to the church, he was sent to the Buchenwald concentration camp in November 1937. There the guards severely abused him and finally murdered him with a lethal injection on the night of July 18, 1939. Paul Schneider was the first Protestant cleric to be murdered by the National Socialists. His funeral in Dickenschied turned into a demonstration against the National Socialist regime.