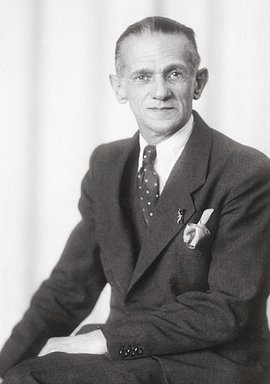 Otto Weidt grew up in Rostock and followed his father by training as a wallpaper hanger. He wrote poetry in his free time. A pacifist, he managed to evade military service during World War I due to an ear condition. Otto Weidt, who had two sons from his first marriage, met Else Nast in Berlin. They married in 1936. His plans to establish himself in Berlin with an upholstered furniture factory failed. After going almost entirely blind, he became a brush-maker and opened a brush workshop in Berlin-Kreuzberg in 1936. Otto Weidt was a convinced opponent of National Socialism. From 1939 on he employed mainly Jews. He did everything he could to protect them from the state’s anti-Jewish measures. In 1940 the factory moved to Rosenthaler Straße 39 in Berlin-Mitte. More than thirty blind and deaf Jews worked for him there. He also supplied the Wehrmacht with brooms and brushes produced in the workshop, which meant the company was classed as “important for the war effort.” Through this status and thanks to Otto Weidt’s regular bribes to Gestapo officers, his workers were not deported for some time. He and other helpers obtained food, forged papers, and hiding places for them. When his secretary Alice Licht was deported at the end of 1943, he travelled after her to get her back from Auschwitz concentration camp. He managed to help her escape. After the war, Otto Weidt was involved in building a home for Jewish children and old people in Berlin-Niederschönhausen.