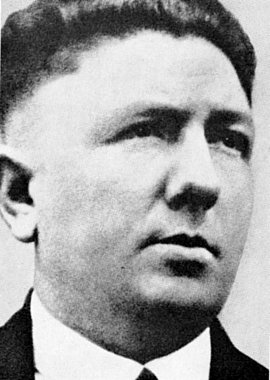 Otto Engert, born in Prößdorf near Altenburg in 1895, grew up in a family of farmers and learned the carpentry trade. He joined the KPD in 1920 and represented the party in the Thuringian state parliament from 1924 to 1928. During this time, he was also the editor of the Sächsische Arbeiter-Zeitung newspaper. He was expelled from the KPD in 1928. After 1933, Engert initially lived illegally in Leipzig, but was arrested in the early summer and held in concentration camps for eight months. He made contact to the KPD again in early 1934, working with Georg Schumann and Kurt Kresse. The group became more active from 1941 on, coming into contact with the resistance circle around Theodor Neubauer and Magnus Poser. At the end of 1943, communist resistance groups made a concerted effort to gain support from other, non-communist sources, emphasizing the necessity to end the war for national reasons. The “guiding principles” drawn up by Georg Schumann and Otto Engert were to form the “platform” for a struggle against National Socialism, which aimed to overcome the outmoded boundaries between political groups and social classes. The “platform” was not initially designed for publication in the form of leaflets, but was written to clarify basic political positions within the communist resistance circle around Schumann. In the winter of 1944, Schumann and Engert wrote several leaflets, calling on the population to join in the “resistance against war and Nazi rule.” These leaflets picked up on the main objectives of the “platform” and called for a non-partisan resistance movement. Otto Engert was arrested in July 1944, sentenced to death on November 12, 1944, and murdered in Dresden on January 11, 1945.