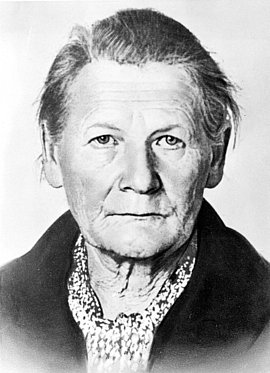 The milliner Ottilie Levit grew up in a Jewish family. After moving to Berlin, she joined the Workers’ Educational Association for Women and Girls. In 1893, she married Wilhelm Pohl, with whom she had two sons. She joined the SPD in 1908 and the USPD during World War I. Her husband died in 1915. She worked as an office assistant for the Berlin administrative authorities until 1924 and then became unemployed. She was on the executive board of the Berlin Consumer Cooperative and active in the Red Aid organization. After the National Socialists took power in 1933, Ottilie Pohl, Rosa Lindemann, and other women provided logistical and financial support for prisoners and their families. In summer 1940, she found accommodation for Rudolf Hallmeyer, the instructor to the KPD’s central committee. After he was arrested, Ottilie Pohl was accused of “preparation of a highly treasonous undertaking” and sentenced to eight months’ imprisonment for aiding and abetting a crime in May 1941. She had already served this length of time in remand prison but was ordered to pay the costs of the court case. Ottilie Pohl was deported to the Theresienstadt Ghetto on November 20, 1942, and perished there a year later.