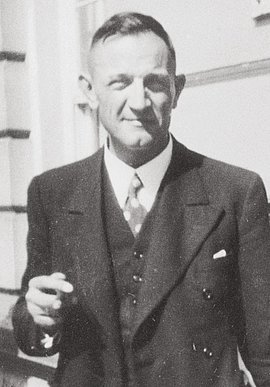 Brought up in a pastor's home as a German nationalist loyal to the Kaiser, Niemöller became a naval officer in 1920 and commanded a submarine in the First World War. From 1919 on, he studied theology in Münster. After his ordination in 1924, he served as general manager of the Inner Mission in Westphalia, and from 1931 on he was a parish pastor in Berlin's Dahlem district. Niemöller initially tolerated and supported the NSDAP. However, he soon found himself at odds with the regime after the National Socialist takeover. When the Aryan Acts were also applied to the church, he banded together with other pastors to form the Pfarrernotbund (Pastors' Emergency Council) in the fall of 1933. One of the most active thinkers of the Confessional Church in Berlin-Dahlem, Niemöller became one of the most well-known figures in resistance from within the church. In March 1934 the regime temporarily banned him from speaking in public. One year later he was arrested together with one hundred other pastors who had spoken out against the attacks of National Socialist ideologue Alfred Rosenberg. Under constant Gestapo surveillance and arrested again on July 1, 1937, Niemöller was sentenced by a Berlin court on February 7, 1938, to nine months in a maximum-security prison, which the court regarded as having been served in pretrial confinement. However, the next day Niemöller was sent to the Sachsenhausen concentration camp as Adolf Hitler's "personal prisoner." Here he was immediately placed in solitary confinement. On July 11, 1941, he was transferred to the Dachau concentration camp. After the war, Martin Niemöller served in senior positions in the Protestant Church and was instrumental in drafting the Stuttgart Confession of Guilt of October 19, 1945.