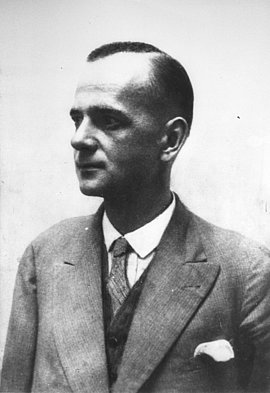 Kurt Schumacher studied law and politics from 1915 to 1919 and obtained his doctorate in 1920. He joined the SPD as a student in 1918. As politics editor for the Schwäbische Tagwacht in Stuttgart from 1920 to 1930, he became a prominent representative of the city’s Social Democracy. He was a passionate supporter of the threatened Weimar Republic and opponent of anti-democratic forces. He was chairman of the Stuttgart local organization of the Reich Banner Black-Red-Gold for several years. Kurt Schumacher became a member of the Reichstag in September of 1930. When Joseph Goebbels called the SPD a “party of deserters” in the Reichstag on February 23, 1932, he responded with a spontaneous speech honored as one of the sharpest attacks on National Socialism to this day. Placed on wanted lists, Schumacher was arrested in Berlin on July 6, 1933. Following brief spells in prisons in Berlin and Stuttgart, he was then sent between various concentration camps for almost ten years. On his release from Dachau concentration camp, he was forced to stay in Hannover. He was imprisoned again for several weeks after the attempted coup of July 20, 1944, this time in Neuengamme concentration camp, near Hamburg. From Hannover, the undisputed leading figure of Social Democracy began rebuilding the SPD. In 1946 the SPD party congress voted him party chairman. He retained this office until his death in 1952.