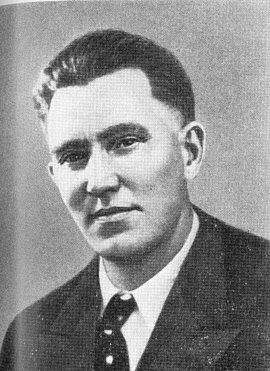 The metalworker Karl Zimmet, born in Regensburg in 1895, fought in World War I and joined the KPD in 1920. He was involved in illegal activities after 1933, writing appeals to the public, but was not arrested. A resistance group formed around him, Georg Jahres, and Hans Hutzelmann in Munich in 1942. The group was close to the KPD and wrote leaflets aimed mainly at forced laborers and prisoners of war. Many opponents of the Nazi regime saw the German Wehrmacht’s defeat at Stalingrad as a turning point in the war. However, expressing doubts as to the “final victory” was regarded as defeatism and demoralizing the troops, and was punishable by death sentence. The resistance group around Karl Zimmet therefore emphasized in one leaflet that even leading National Socialists had doubts about Germany emerging from the war victorious, and reminded readers of the crimes that the Nazi leadership would have to answer for. The Munich group also worked with other circles in the region, mainly with a Munich resistance organization of Soviet forced laborers and prisoners of war, the BSW (Fraternal Cooperation of Prisoners of War). Many of its members have remained unknown to this day. One BSW member had contact to Emma Hutzelmann and thus to the resistance group Antinazistische Deutsche Volksfront (Anti-Nazi German People’s Front) via her husband. Emma Hutzelmann had been arrested in 1942 after the discovery of Josef Römer’s resistance group. On her release she collected clothing and food for prisoners of war. In the fall of 1943, Gestapo informers led to the discovery of a total of 13 groups with nearly 300 members in several forced labor camps. On September 4, 1944 alone, more than 90 members of the BSW were murdered in Dachau concentration camp by mass shooting. Hans Hutzelmann, Rupert Huber, and the Czech chemist Karel Mervaert were sentenced to death on December 8, 1944, and murdered in Brandenburg-Görden on January 15, 1945. Emma Hutzelmann, who managed to go into hiding, died in an air raid. Karl Zimmet feigned mental illness and survived the Nazi regime in a sanitarium.