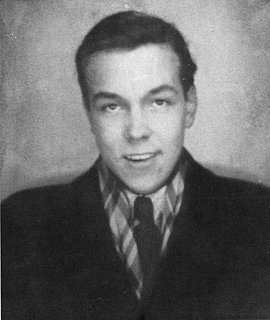 Karl-Heinz Schnibbe, born in Hamburg, grew up in a Social Democratic family. His father started out as a seaman on a freight ship and later worked at the Hamburg port. His family were members of the Mormon church. Karl-Heinz Schnibbe joined the Hitler Youth at the age of twelve but was later expelled for refusing to obey orders. After completing school, he trained as a painter and decorator. He and his friends Helmuth Hübener and Rudolf Wobbe often met to discuss political events. In 1941 they secretly listened to BBC radio programs and distributed the news they learned around working-class areas of Hamburg via protest flyers. After his friends Helmuth Hübener and Gerhard Düwe were denounced and imprisoned, Karl-Heinz Schnibbe was also arrested by the Gestapo. He was initially put into Fuhlsbüttel prison. In August 1942 the “People’s Court” in Berlin sentenced him to five years in a penal institution. In the spring of 1945 he was released to be drafted into the Wehrmacht. He became an American and then a Soviet prisoner of war and had to spend several years working in Soviet camps. He was able to return to Germany in 1949 and emigrated to the United States in early 1952.