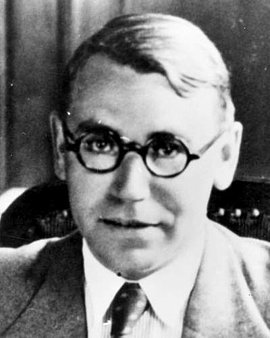 Karl Blessing was married to Ida Harden, with whom he had three daughters and two sons. Blessing joined the Reichsbank in 1920 and in 1929 attended the Young conference in Paris as assistant to Reichsbank president Hjalmar Schacht. In 1934, he was recalled from Basel to assume a position with the Reichsbank. At the same time, he served as a senior desk officer in the Reich Ministry of Economics. In February 1939, Hitler dismissed Karl Blessing and other Reichsbank board members including bank president Schacht for having criticized National Socialist economic policy in a memorandum. Banker Hermann J. Abs and Peter Yorck von Wartenburg brought Blessing into contact with the Kreisau Circle. In 1941, he was appointed head of Kontinentale Öl AG, the company that exploited the Caucasian oil reserves in the summer of 1942 following the German invasion of the Soviet Union. From 1943 on, the plans of the conspirators around Carl Goerdeler and Ludwig Beck envisioned Blessing as future Reichsbank president or economics minister by virtue of his technical expertise. The Gestapo remained unaware of these plans. Blessing was thus able to escape interrogation and arrest and lived to see the end of the war.