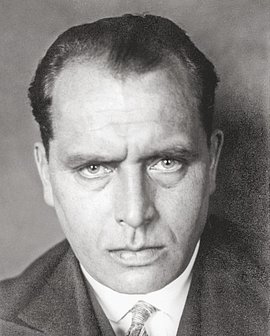 Leber grew up in a peasant family in Alsace and after completing secondary school was an apprentice in a carpet factory. From 1910 until 1912 he received a scholarship to attend university preparatory secondary school, after which he went on to study history and economics. In 1912 he joined the Social Democratic Party (SPD). In 1914 he volunteered for military service and later became an officer. As a lieutenant in 1920, he helped to suppress the Kapp Putsch. He married Annedore Rosenthal, and they had a son and a daughter. Editor in chief of the Social Democratic Lübecker Volksbote in 1921, he was elected to the Reichstag as an SPD candidate in 1924. He remained a member of the Reichstag until 1933, serving as his party's spokesman for military affairs. Arrested in 1933, Leber was initially released from the Sachsenhausen concentration camp in 1937. He earned a living in Berlin as a self-employed coal merchant, yet he soon sought out his Social Democrat friends and later joined the Kreisau Circle. In the summer of 1944, he contacted the Communist Franz Jakob, whom he knew from the Sachsenhausen concentration camp and who was regarded as one of the prominent members of the resistance group around Anton Saefkow. Leber, who was to become chancellor or minister of the interior after a successful coup, was arrested on July 5, 1944, on a tip from a Gestapo informer. He was sentenced to death by the People's Court on October 20, 1944, and murdered in Berlin-Plötzensee.