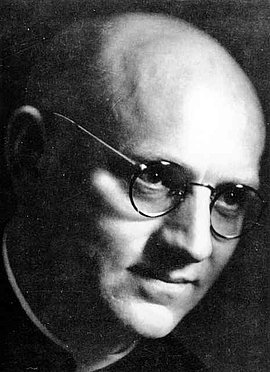 Johann Maier studied theology in Regensburg and was sent to the Collegium Germanicum-Ungaricum in Rome after only three semesters by the Bishop of Regensburg, Michael Buchberger. Maier was ordained as a priest in 1933 and gained a doctorate. Following various posts as a priest, he began teaching at the Regensburg seminary in 1938. He was made provisional cathedral preacher of Regensburg in 1939 and fully appointed to the post in 1940. On April 22, 1945, Gauleiter Ludwig Ruckdeschel held a fanatical speech calling for the people of Regensburg to defend their city to the very last. Some people chose to resist, however. On the morning of April 23, 1945, a rumor spread that there was to be a rally for surrendering the city to the U.S. Army without a fight. That afternoon several hundred people gathered outside the New Town Hall, among them Johann Maier. More and more people flooded the square during the course of the evening. When the situation threatened to escalate, Maier called on the crowd to remain calm. However, he was arrested and put before a drumhead court martial that same evening. Shortly before midnight, Johann Maier and the 70-year-old Josef Zirkl were sentenced to death. The two men were publicly hanged in the early hours of April 24. Johann Maier wore a sign around his neck bearing the words: "Here died a saboteur." In the night of April 26, the city commander and the regional NSDAP leader left Regensburg. The city was surrendered to the 3rd U.S. Army on April 27 without fighting.