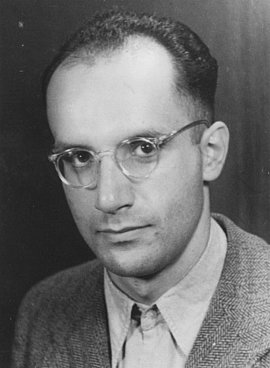 At the age of only nine, Jizchak Schwersenz, the son of a businessman, joined the orthodox Jewish youth group Esra. At thirteen, he became a member of the Jewish scouts’ group Kadima (Forwards). Shortly before finishing school, he went to Holland with a group of young people, and did not return home for fear of the Gestapo. In 1933, Schwersenz became a youth leader in Youth Aliya, an organization that prepared young Jews for life as workers in Palestine. The leadership of the international Zionist organization Hechalutz (Pioneer) called Schwersenz back to Germany in 1935. He ran a home for young Jews in Cologne while attending Cologne’s Jewish Religious Academy, a former teacher training school, up to the end of 1936. After graduating from the Adass Jisroel Grammar School and attending teacher training, Jizchak Schwersenz qualified as a teacher in February 1939. His qualification entitled him to teach “non-Aryan pupils.” He became the director of the Youth Aliya School in Berlin that same year. When Schwersenz was threatened with deportation in August 1942, he escaped by going underground. With the support of Edith Wolff, he gathered young Jews from among his former pupils and the Zionist youth movement around him in the spring of 1943, and prepared them for life in illegal hiding. The group, which soon had forty members, was called Chug Chaluzi (Pioneer Circle). It was the only known underground Zionist group of its kind in Germany, and survived for more than a year. The members were united by their will to “keep going,” to support the deportees in the eastern camps and to try to survive by escaping abroad. Jizchak Schwersenz himself managed to escape to Switzerland in February 1944. He later emigrated to Haifa, returning to Germany in 1989.