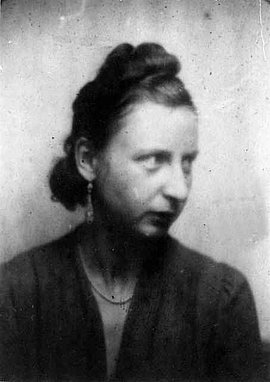 Ilse Demme was born in Kassel in 1909, and was classified as a “1st degree Jewish Mischling (half-breed)” by the Nazi race laws passed in 1935. She passed her state teacher’s examination in spring 1931, but was not taken on as a teacher. She worked as a secretary and foreign language correspondent from early 1935 on, becoming a translator for the Ibero-amerikanische Handelsgesellschaft in 1938/39 and later for Siemens. She had had contacts to foreigners for some time, and despised the Nazi regime. In 1941 she made copies of various sermons by the Bishop of Münster, Clemens August Graf von Galen, who publicly declaimed the murders of mentally ill people. Ilse Demme was then denounced, and sentenced to three years’ imprisonment for alleged violations of the “Heimtückegesetz” (Malicious Practices Act) on August 18, 1942. The police claimed she had listened to “enemy radio programs” and passed on information. In mid-July of 1942, the chief public prosecutor charged Ilse Demme at the Berlin local court with “undermining the people’s trust in the political leadership… through maliciously spiteful comments," and thus carrying out a “treacherous attack on the state and the party.” She was immediately sacked as a result.