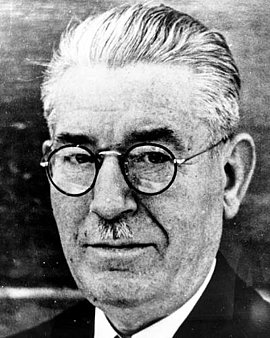 The wood turner Hermann Schlimme worked as a labor union official before the First World War. During the Weimar Republic he was secretary to Theodor Leipart, the chairman of the General Federation of German Labor Unions (ADGB). In 1931 Schlimme was elected to the ADGB executive committee. When the National Socialists abolished the labor unions on May 2, 1933, Hermann Schlimme was imprisoned for a short period. Afterwards he endeavored to maintain his contacts to like-minded comrades from the union movement. He had particularly close links to the circle of the illegal Reich leadership of the labor unions around Wilhelm Leuschner, the former interior minister of Hesse. Schlimme was imprisoned again in 1937. After almost a year on remand in Berlin-Moabit Prison, he was sentenced to three years in a penitentiary, which he served in the prisons in Brandenburg and Amberg. In their discussions on future posts, the group of labor union conspirators around Wilhelm Leuschner and Jakob Kaiser designated Hermann Schlimme for the department of staff questions and organization. Hermann Schlimme survived the war.