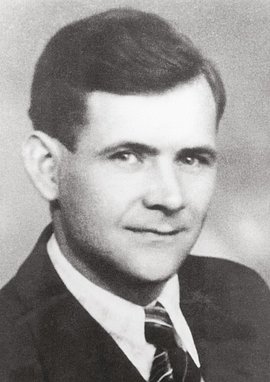 Hermann Abke began his working life as an unskilled laborer in various factories, before training as a turner. He first came into contact with the ideas of the Bible Students (Jehovah’s Witnesses) in the mid-1920s and maintained his beliefs after the Jehovah’s Witnesses were banned across Germany in April 1935. In 1939 he married the housemaid Mariechen Nissen; the couple had two daughters and a son. When Hermann Abke was drafted to the Wehrmacht in April 1944, he declared that he could not carry out military service for religious reasons, and refused to swear an oath to Hitler. He was put into the Fort Zinna Wehrmacht prison in Torgau and sentenced to death by the 1st senate of the Reich Court Martial on June 27, 1944. The basis of the sentence was paragraph 5 of the “Wartime Special Penal Code” (KSSVO) that came into force on August 26, 1939. Hermann Abke was murdered in Halle an der Saale on July 17, 1944.