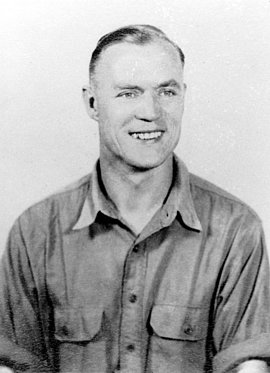 Herbert A. Tulatz grew up in Breslau; he was the son of a metalworker and a seamstress. He joined the Young Socialist Workers in 1928 and the Socialist Workers’ Party of Germany (SAP) in 1931, continuing his work for the party illegally after the National Socialists took power. He maintained links to Czechoslovakia as a courier and was involved in distributing illegal publications. He was arrested in September 1936 and sentenced to three years and six months in a penal institution in March 1937. After his release in March 1940, he worked in a publishing house and was then drafted into one of the 999th Division’s “probation units” in October 1942. He was taken prisoner of war in Tunisia in April 1943. Initially interned in Camp Gruber (Oklahoma), he was transferred to the Fort Devens anti-Nazi camp after conflicts between opponents of the Nazis and supporters of the regime. As camp spokesman, Herbert Tulatz read an appeal for peace from Fort Devens on air on BBC London on April 7, 1945. Passed on February 6, 1945, this appeal was supported by 1,391 prisoners out of the camps’ approximately 2,000 soldiers. They called on the Germans to lay down their weapons and warned: “If you go on fighting, you are defending those guilty of this war in Germany. Not the homeland, but Hitler, Himmler, Göring, Goebbels, Ley, Klöckner, Krupp, and consorts—the Nazi regime.”