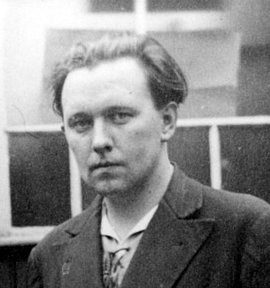 The son of a theologian, Helmut Rüdiger joined the Wandervogel youth movement in Chemnitz. From 1919 on, he regarded himself as an anarchist and a disciple of Gustav Landauer. He worked in Chemnitz’s unemployed movement and became a member of the anarcho-syndicalist Freie Arbeiter-Union Deutschlands (Free Workers’ Union of Germany - FAUD) in 1922, and in Munich in 1925 its chairman. He moved to Berlin in 1927, editing the Syndikalist newspaper from 1928 on. At the FAUD’s Mannheim Reich Congress in 1930, Rüdiger was elected onto the party’s administrative commission. He left Germany in 1932 for Spain, where he was co-editor of the emigration newspaper Internationale in 1934/35 along with Arthur Müller-Lehning. At the same time, Rüdiger had contacts to the illegal FAUD groups in Germany. From 1936 on, he held the post of Secretary of the Sub-Secretariat of the International Workers’ Association (IWA) in Barcelona, and was also in charge of German-language propaganda for the anarcho-syndicalist labor union CNT/FAI. In August 1937, he went to Paris to prepare for the IWA’s extraordinary congress. In the spring of 1939, he fled to Sweden, where he worked for the syndicalist newspaper Arbetaren. Rüdiger, who adopted Swedish nationality in 1949, became one of the most influential theoreticians of modern anarchism. He died in Madrid in 1966.