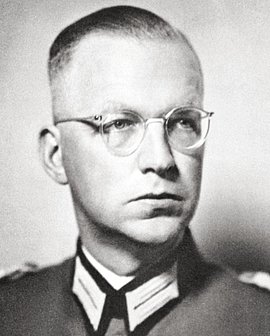 Groscurth joined the 75th Infantry Regiment in Bremen in 1916 as an officer cadet and was taken prisoner of war by the British, severely wounded, in 1917. He left the Reichswehr in 1920, studied agriculture, and worked as an estate administrator. In 1924 he rejoined the Reichswehr, in 1929 becoming adjutant to Erwin von Witzleben. Groscurth worked in the Office for Foreign Affairs/Counterintelligence from 1935, and from 1939 as a liaison officer between Counterintelligence and the army leadership as chief of the Division z.b.V. in the Army High Command. In the fall of 1939 Groscurth, who was also in contact with opposition activists in the foreign office, was one of the driving forces for an attempted coup. He was posted to the front in 1940 after making the army leadership on the Western Front aware of the murders in Poland and criticizing Himmler’s orders to the SS to father as many children as possible, including illegitimate children. In August 1941, Groscurth tried in vain to stop a mass murder by a mobile killing unit of the chief of the Security Police and the SD (Security Service) in the Ukraine. Promoted to colonel in 1942, he was captured and put into a Soviet prisoner-of-war camp in February 1943, and died there shortly afterwards of typhus.