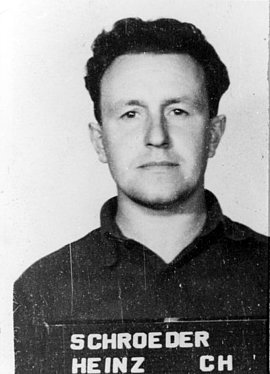 Heinz Schröder was born in Lichterfelde in 1910. His parents were organized labor unionists and Social Democrats. After training as a salesman, Schröder joined the SPD in 1928, having previously been active in the Young Socialist Workers (Sozialistische Arbeiterjugend - SAJ). Despite the 1933 ban on the Social Democratic Party, he kept up informal contacts with other opponents of the regime, working illegally. After his arrest in December 1935, Schröder was taken to the Gestapo’s cellars in Prinz Albrecht Strasse and the Columbia Haus in Berlin-Tempelhof. Sentenced for “preparation for high treason,” he was imprisoned in penitentiaries and prison camps until July 1938. He then worked in his father’s painting and decorating company for a while, until he was declared “worthy of service to a limited extent” in October 1942, and called up to the 999th penal division on the Heuberg. As a member of this probationary unit, Heinz Schröder was taken prisoner of war outside Tunis by the Western Allies at the end of March 1943. In August 1943 he was involved in forming the “1st Anti-Nazi Company” in Camp Breckinridge in the US state of Kentucky, of which Karl Kuntze was also a member. His article “Take the Germans Out of Uniforms” in the camp newspaper Der Europäer caused a stir among his fellow prisoners in Camp Campell in June 1944. In early 1946, Schröder returned to Germany via the anti-Nazi camps Fort Devens and Fort Kearney.