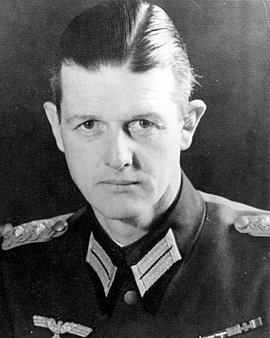 Hans-Otfried von Linstow became a Reich Army officer after the First World War and held various staff positions until the beginning of the Second World War. In April 1944 he was posted to Paris as chief of staff to the military commander in France, General Stülpnagel. Stülpnagel and his confidant Cäsar von Hofacker were part of the circle around Stauffenberg which was plotting a coup. Linstow was initiated in these plans and on July 20, 1944 in Paris he began arresting members of the Gestapo and SD (Security Service) in line with the “Valkyrie” orders. Late that evening Linstow heard by telephone from Stauffenberg that the assassination attempt had failed. The operation in Paris, which had been very successful up to now, was called to a halt. After Carl Heinrich von Stülpnagel attempted to commit suicide, Hans-Otfried von Linstow was arrested in Paris on July 23, 1944. He was sentenced to death by the People’s Court in Berlin on August 30, 1944 and murdered the same day in Berlin-Plötzensee.