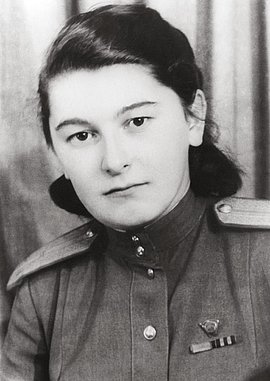 Hanna Bernstein grew up in a communist family in Berlin. Her father Rudolf, who was a KPD member of the Berlin-Mitte local council and ran various party companies, was arrested in February 1933 and imprisoned in Sonnenburg concentration camp. Upon his release the family emigrated to the Soviet Union in June 1934. After completing her schooling, Hanna Bernstein joined a propaganda unit of the Red Army in 1942. She used her German language skills in various ways there: interpreting during interrogations of German prisoners of war and defectors, evaluating captured German military letters, and writing flyers and appeals to Wehrmacht soldiers. Hanna Bernstein spoke to Wehrmacht soldiers via a loudspeaker vehicle close to the frontlines, to encourage them to give up fighting. She also flew over the German soldiers’ positions at night in a double-decker plane, reading her appeals aloud. She accompanied the Soviet army in her loudspeaker vehicle all the way from Ukraine to Vienna, where she experienced the end of the war in April 1945.