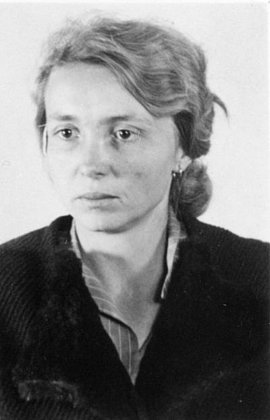 Galina Romanova, the daughter of a blacksmith, was born in Romankovo near Dnyepropetrovsk/Ukraine in 1918. She was a Komsomol member at school, but was expelled after her father’s arrest by the NKVD in 1937. Due to the war, Galina Romanova was only able to finish her medical degree in Dnyepropetrovsk during the German occupation of 1942. She was deported to Germany on July 1, 1942, and made to work as a doctor in forced labor camps. Initially working in Wildau, she provided medical care at several camps in and around Oranienburg from December 1942. Galina Romanova built up a circle of friends in Wildau and Oranienburg. Along with her first-aid assistant Aleksandr Khomlov, Nikolai Romanenko, Alexei Kalinitchenko, and others, she organized resistance among Soviet forced laborers. Konstantin Konstantinovitch Shadkevitch provided contacts to French and Belgian prisoners and to Georg Groscurth. Under the pretence of medical consultations, Groscurth was her direct connection to the resistance group Europäische Union (European Union), which had formed around himself, Robert Havemann, Herbert Richter, and Paul Rentsch. Following the arrests of the core members of the Europäische Union in September 1943, Shadkevitch, Galina Romanova, and their friends continued their work, preparing a message to the Allies. Just before their missive was due to be taken to Sweden, this part of the group was also discovered and arrested. Alexei Kalinitchenko died during his interrogation. Galina Romanova was arrested for her activities in the Europäische Union on October 6, 1943, sentenced to death on April 27, 1944, and murdered in Berlin-Plötzensee on November 3, 1944.